The Power and the Glory exhibition re-opens Auckland Castle

A new temporary exhibition opens the 2014 visitor season on Sunday at Auckland Castle in Bishop Auckland.

The Power and the Glory exhibition showcases Tudor artifacts and masterpieces, some of which have never been displayed in the North East before. The castle was the former home of Henry VII’s most trusted advisor.

The Paradise State Bed, which is believed to be the last surviving piece of furniture from the Tudor palace of Westminster, is said to be worth an astonishing £20m.

“You need to think about it as an art work,” explains Auckland Castle curator Dr Chris Ferguson. “The head board is divided into three sections, a bit like a medieval altarpiece. The left hand panels and right hand panels are the arms of England and France, over which Henry was asserting authority. In the central panel you have a depiction of Adam and Eve.”

“In that period it was used as a story for the perfect marriage. So having it on their marriage bed, this bed was probably commissioned only three months after they were married, it’s all about their hopes for their new dynasty.”

Other items on display include Elizabeth of York’s prayer book on loan to Auckland Castle from Stonyhurst College, which she signed ‘Elizabeth Plantagenet’. She later returned to this page to add ‘The Queen’.

The Zurbaran paintings hang in the Long Dining Room, which was added to the castle in the 16th Century. The paintings of Jacob and his Twelve Sons were acquired by Bishop Trevor in 1756 after parliament repealed the Jewish Naturalisation Act. Bishop Trevor had promoted the legislation which became law in 1753, only to see it repealed a year later. 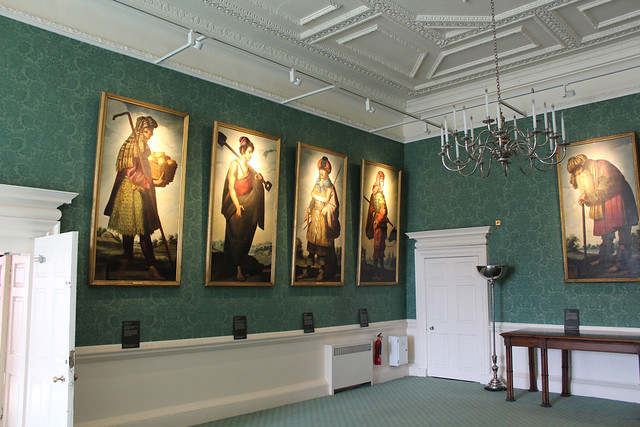 Their name is taken from the Spanish master Francisco de Zurbarán, who created the paintings over a hundred years before they would be bought to hang in Auckland Castle. The dining room was altered for the paintings, which hang close to the lowered, moulded ceiling that bears Bishop Trevor’s coat of arms.

Guides will be on hand to explain the significance of the paintings to visitors.

“Being a guide is a great experience because you learn so much more about the Bishops, the castle, the history of the castle, how all of the rooms evolved over the centuries,” said Anne Simmons, a guide who will be explaining the features and exhibits at the castle to visitors.

listen to ‘Tour guides prepare for castle opening’ on Audioboo

Visitors will also be able to use touch screen displays and a new app to see new digital interpretations. The 12th century chapel was also a banqueting house, and the app displays reconstructions of the past.